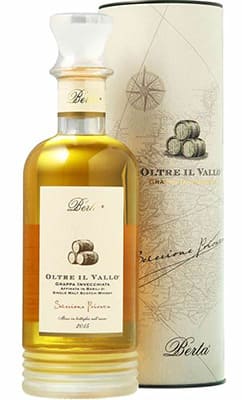 A TRIP FROM HIGHLANDS TO MONFERRATO

It was May of 2010 when a new project was created in Mombaruzzo. Two enterprises were brought together, the Berta family and Diageo Italy. The idea of "Oltre il Vallo" was born: a fine aged grappa, aged in casks of single malt scotch whisky. This project is the merging of two cultures: the artisanal passion of the Berta family and the workmanship of the best Scottish tradition, represented by a global company such as Diageo, the worldwide leader of premium alcoholic beverages. Two very different cultures, united in the passion for distillation. On the one hand grappa, the tradition from the rural Italian lands and on the other Scottish single malt, fruit of the fields of northern Europe. The name “Oltre iI Vallo" recalls how nobody has ever managed to go beyond the old Hadrian fortifications, the wall that was the most northern border of the Roman Empire in Britain for much of the period of Roman rule over these lands. A fortification that divided the island into two parts. No-one could ever get past this boundary, until today, when the Highlands and Monferrato symbolically unite in this aged distillate. The barrels, selected one by one, arrive from that far off land, from the ancient and finest Scottish distilleries of Lagavulin, Caol Ila and Mortlach, important names that have made and still make the history of the best Scottish whisky.

An amber colour ”Oltre iI Vallo" is characterized by a smooth taste and charm. At first there is an explosion of perfumes ranging from the notes of grape, raisins, dried fruit and almonds. These sensations then give way to a slight hint of smoke, peat and malt. Silky and enveloping, it lingers in the mouth and confirms soft olfactory sensations, an aromatic bouquet reminiscent of oranges, hazelnuts and, a finally hints of tobacco and honey.The alcohol content is 43% vol. and it’s sold to the consumers in an elegant can.